In the first part of this post, I demonstrated how beta and quasi-binomial regression can be used with dependent variables that are proportions or ratios. I applied these models to attendance rates of the German Handball-Bundesliga. In the second part, I want to investigate whether attendance increased after the World Championship that took place in January 2019 in Denmark and Germany (with a new spectator record). It is often suggested that such tournaments have an impact beyond the event itself, and the following analyses are aimed to shed light on this for the present example.

Data were obtained for the current and the last two seasons from https://www.dkb-handball-bundesliga.de, and the R code for wrangling and cleansing the data is available on my Github.

Even though this looks like there was some effect, these descriptive values should be treated with caution because several variables need to be controlled for in an appropriate statistical model as done below.

In the models, I will control for a bunch of variables that are all categorical, and I use coding schemes tailored to my hypotheses and analyses as defined in the following

The analyses reported in the first post revealed that a quasi-binomial and a beta model fit the data best. (The beta was slightly inferior but it has the advantage that prediction intervals—if desired—can be obtained.) In the following, I fit these two models and include, among other predictors, the following terms:

The coefficients from both models shown below indicate that attendance rates are larger in the second half of the season (by a value of ca. 0.3 logits). Furthermore, attendance rates were largest in 2016/17 and then slightly decreased (as indicated by the negative signs for year2 and year3). Most importantly, there is a positive interaction effect ix2 indicating that attendance after January was higher in 2019 compared to the years before. It seems reasonable to conclude that this increase is due to the World Championship that took place in January 2019. The effect is larger in the quasi-binomial model than in the beta model. Furthermore, note that p-values are of secondary importance here, because the data are in fact population data (i.e., no sampling error).

To visualize the effect, I calculate the fitted values (i.e., the model predictions) for the actual data df2. Furthermore, I calculate these values for imaginary data (newdata) assuming there was no championship effect in the current season. Thus, these predictions for newdata are the attendance rates that were expected for the second half of the current season based on the data from the years before.

The plot nicely illustrates the championship effect. The green lines represent the predictions for the Observed data, whereas the blue lines represent the predictions that were Expected for these matches based on the data from 2016/17 and 2017/18. As you can see, we expected a decline in February 2019 (blue line), since such a pattern was consistently observed in 2017 and 2018. However, attendance stayed stable in 2019 (green line). Thus, the yellow area indicates the relative increase in attendance after the World Championship in January 2019. 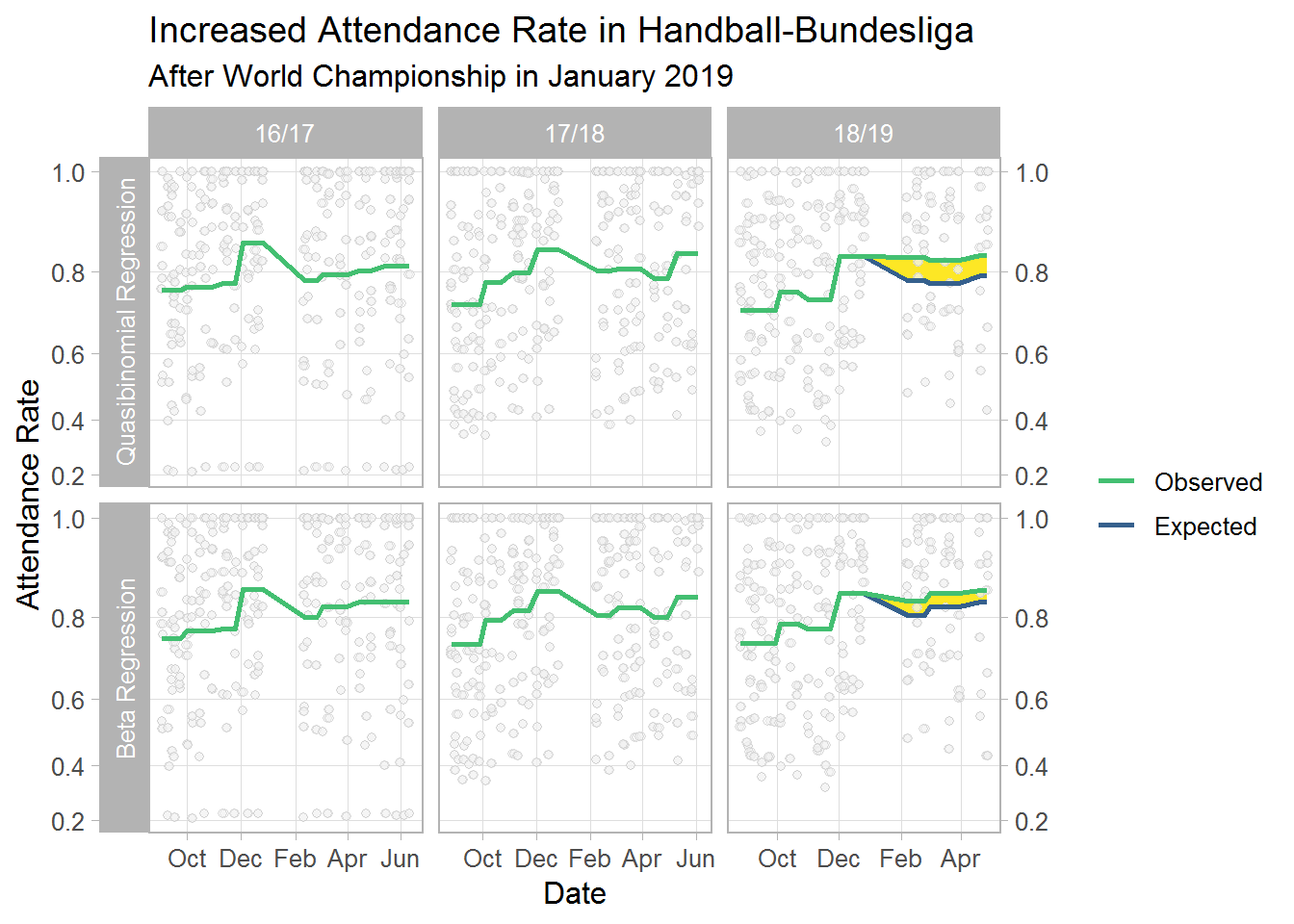 To quantify the championship effect, I average over all matches after January 2019 and compare the green and the blue line in the plot (i.e., predictions for observed data compared to expected data if no effect was present). As seen below, the results depends to some extent on the model even though it is a sizable effect for both. According to the beta regression model, the attendance rate per match increased by 4 % after the championship and by 7 % according to the quasi-binomial model. This corresponds to an average of 184 and 315, respectively, additional spectators per match.